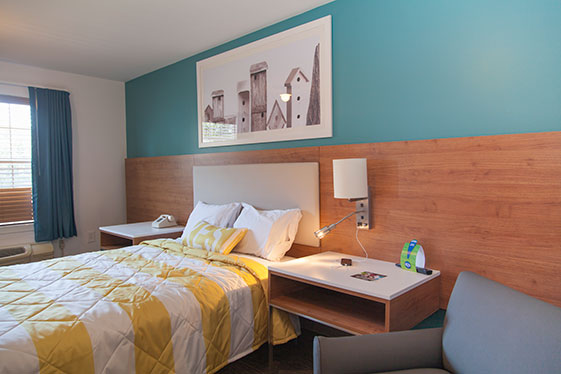 I recently had the opportunity to chat to Jon Pertchik, CEO of Intown Suites, at the Serviced Apartment Summit in New York. The extended stay model fascinates me. Take a property, minimise the ancillary services and pass on the savings to the customer. All of a sudden you jump from an average length of stay that's under a week to over 50 days!

Clearly there is some other alchemy involved. To hear a little more about how John and his team do it, watch this 8minute video...

JON: I’m Jon Pertchik. I’m our CEO of Intown Suites. We’re the largest economy Extended Stay company in the US. We have about a 25% market share, 25,000 rooms, 189 locations, 89 average day length of stay which is very unusual. It really truly, when you hear the term in Europe ‘Aparthotel’, we’re really that. I mean, we are not a hotel. But we’re also not an apartment. We’re really something different. Even Extended Stay America that everybody talks about, that everybody knows - publically traded; their average length of stay is about 16 to 18 days, something like that. That’s an estimate, I mean, I’m not 100% on the exact but I know it’s a fraction of ours. Which creates some interesting opportunities and some challenges for us. So, a very, very unique company.

CHARLIE: And, what’s the reason you have such long length of stay? Is it because you’re in certain geographies?

JON: I think it’s the nature of our guest. Our guests typically pay for a week and stay for a week. They prepay. Many of them have been with us for 10 years or 2 years or 3 years. And, when you ask them, you know, “how much longer are you staying with us? We love you as a guest.” And they’ll say, “Well, I’m probably leaving next month,” and they’re there longer. It’s just the easier sort of transaction, costs and in quotes “not just dollars” but emotional sort of thing. You’re not having to get cable and all these other things. It’s just easy to get in. Once you get in, it’s fairly comfortable. We really are focused heavily on making, both in the physical sense as well as the way our GM’s are trained, making our places very homey and that’s by intention.

Even with the new developments. We have a bunch of new developments we’re doing, we have 8 or 10 going right now. Everything is geared around that. And it’s effective; it works. And, you know we have construction workers, we have blue collar workers, we have travelling nurses; they tend to stay shorter. But even those folks most, I would say – I mean, we have a bunch of stats on this – but 20 to 30 days is very typical.

CHARLIE: And, do you think there is anything you’re doing on property, as you say, you’re training the GMs – what are the things you’re doing that make people decide: “this is like home, I want to keep…”

JON: Sure. Well, if you think about a typical hotel. Even to an extent, a typical Extended Stay hotel. Ask yourself: have you ever seen a GM of a hotel? When you’re in a hotel the GM is this big-name fancy person somewhere hidden in the back office. Our GM’s, and we’re even thinking about changing our lexicon to more apartment kind of’ verbiage, like ‘property manager’. Our GM’s know every guest. They know everything about them, not because they’re nosy, but because they interact all the time with them. And again, everything is geared toward giving a sense that this is a place to call home. There’s a sense of pride even in staying here and it’s not a bad thing. It’s actually a good thing. That’s probably the psychology of it.

CHARLIE: And, your previous experience was building, doing turnarounds and also running communities. How has, the sort of shift towards hospitality surprised you? Any things you’ve learnt that you didn’t expect?

JON: Yeah, well, yes. I mean, I’m not a hospitality long-term guy. I’m not really a ‘subject matter anything’. I’m sort of a real estate guy who’s found himself, three times now, in sort of these dynamic moments of change.

The thing that I anticipated - but it’s even greater than I had expected now and it’s a good thing and I signed up for this because it would challenge myself – was the intense self-discipline one needs to have on the cost side. Running like the prior company - it was also a start-up capital company - it was more luxury real estate. Oversimplifying: luxury real estate, you spend smart more marketing dollars; you get more top-line and that trickles to the bottom, kind of’ simply. Here, you could go crazy spending on fancy marketing concepts and things, and all you’re doing is reducing your bottom line. There’s an intense, intense focus on the cost side. And while I had expected that, it’s even greater than I had expected and that’s a good thing. Again, it’s been great for me to grow as a person and a business person in terms of that focus because it’s new to me.

CHARLIE: That’s great. And, what are the things that you feel you brought from your previous experience that perhaps are new to the hospitality world?

JON: Well, I don’t know if it’s new to hospitality but I can tell you to this company it is. I am accused often of having a very intense sort of sense of urgency. I am a bit of process guy. So, I’ll look at each part of the business not so much tainted by this hospitality background but more generically. Almost like, in a loose sense, like a restructuring person would. I am a little bit of that too; just a touch. And so, you know, looking at each part of the company, and in a sense conceptually, sort of unbundling it, thinking about it, making good choices. And, if there need to be staffing changes or process changes or technology changes, we make them and we go. And I think – not I think, I know: the culture of this company, I don’t think was prepared for that. It was a little bit of a shock to the system. We’ve had a few changes. And we have just a world-class company now. World-class leadership. Really, really amazing. A really impressive group.

CHARLIE: Oh great! And, can you tell us a little bit about the way in which you drive business to the properties? So, distribution and marketing - what works?

JON: You know, and we talked before, the core part of the business – the traditional Intown’s which are true Extended Stay minimum of a week or longer. It’s really driven by, you know, sort of typical – ‘today typical’, not 10 years ago – digital, SEO, optimization. Stuff like that and really that’s most of it for us. And doing a great job that way, or trying to, or striving for that.

And then, married with sort of’ guerilla kind of marketing and field sales. You know, in the field we will literally – and we have a group of sales folk that travel about to markets that tend to be soft or there’s an event coming or some demand driver we’re aware of. And, they will sort of parachute in. Shake the tree. Meaning, if there’s a lot of construction activity in some markets or refinery activity in another market; they will go down. Get the intel from our local folks, the GM’s, the market managers. And go shake the tree. Show up at construction sites. Show up at companies that may, again, create demand for us. If it’s a local hospital, travelling nurses. And they will literally make guerilla-style sales calls. And so, it’s a marriage of that with the digital and SEO kind of marketing that has been most effective.

You know, some things are so simple too. You know, good, good signage. We’re right now undertaking – we’ve completely rebranded the company. Our mission, vision and values as well. And, we’re in the process right now of redoing all of our signage nationwide. On parallel, actually, with renovating all of our properties. We’ll spend almost $200M to do that in these next couple of years. And so, you’ll see new signs, message boards. And, probably 10% of our properties have message boards. You know, it’s a simple thing but good signage, good visibility is really important. So, I’m excited to get these message boards out there from 10% of the portfolio to almost 100%.

JON: It really is. A marriage of that with modern technology and digital, you know, today. And that’s obviously a huge – and it can be done really efficiently. And, on the 50 locations we acquired this year we’re attempting to move them as far as we can toward our true Extended Stay model. And of the 50, twelve of them are fully there. About another quarter-so, another 12/13 are 80% there. And, roughly, the remaining half are baby steps there. But, not there. And so, a sub-set of the 50, about 38 are actually on some form of OTA. And, you know, of course that’s inefficient for us and we prefer not to be! But they are effective for us. So for now, that’s a part of our business as well.

CHARLIE: And, when you say ‘move them onto the full Extended Stay model – so, the property is in the same place as it was before when it was a hotel? I guess the rooms maybe get updated slightly different, you add some amenities. But, how can you shift people from a hotel which is like a three-night average length of stay to being 59?

JON: Sure. Typically, even those are not three. They’re probably, you know, five or six average. Something like that and moving up every day. You know, it starts first with an honest assessment of that location, right? When whoever undertook the site selection exercise – 5, 10, 15 years ago – you know, the criteria they were using was probably a little different to what we would use today for a new build. So, first we look at that and we really try to understand: does this have the potential using our site selection criteria for our new build? How close does it marry up?

And, we have a variety of factors we look at. If we believe we have confidence that it’s fairly close then, our operating model is different – our staffing. We may have five to eight people at the property. Whereas the people we bought that property from may have had 12 to 15.

We’re doing typically weekly housekeeping. So, our cost structure is much less. So, we can offer rooms for less. And so, that lower price point, combined with that honest assessment of that local market area and demand drivers tell us how far we think we can go.

And then, it’s a little bit of, like that’s sort of the theoretical science. And then, there’s the art of just trying to make it happen. You know?

CHARLIE: Great. Thank you so much. That’s been a really fascinating insight.